Home How To Rabies! What you need to know to prevent it turning your pet mad!
How To

Rabies! What you need to know to prevent it turning your pet mad! 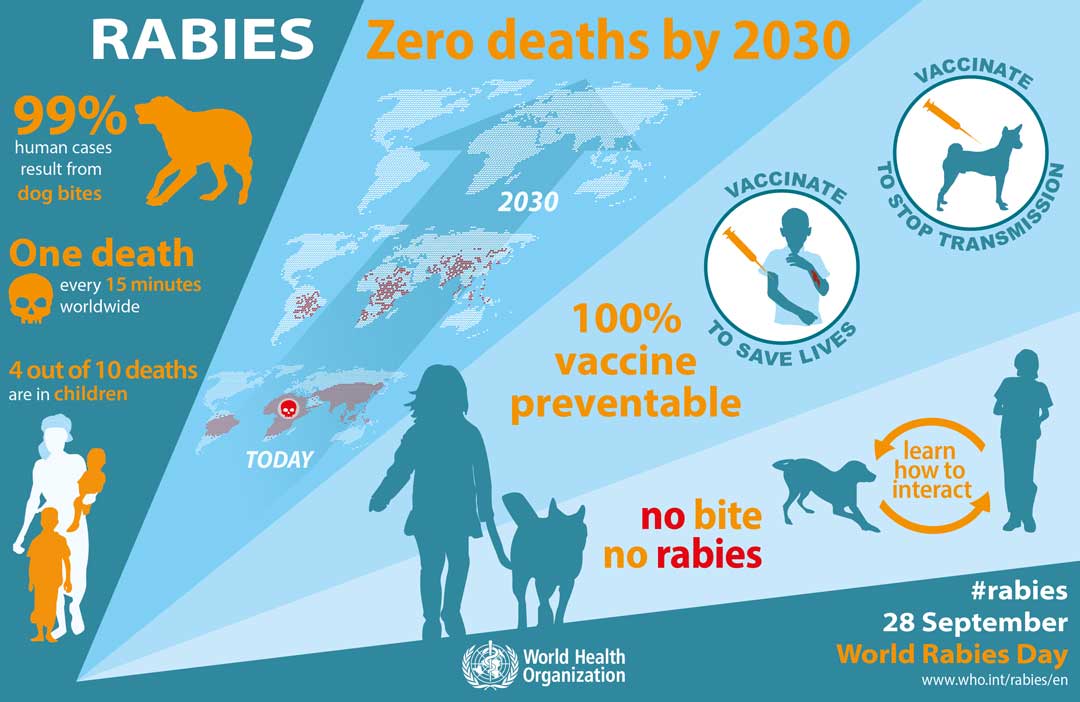 Rabies is a viral disease that attacks the brain and the centre nervous system (CNS) of mammals and also humans. Once the symptoms of rabies are present, death is almost certain. Rabies is a worldwide issue. There is an estimated 59,000 human deaths from rabies annually all over the world and the number of animals including pets and wild animals dying from rabies is immeasurable. Fortunately, rabies is a preventable disease. It can be avoided through proper vaccination. Rabies is caused by the Rabies virus, a species of the Lyssavirus genus. Humans, mammals and vertebrates can serve as its hosts. Rabies virus doesn’t survive long outside the host’s body. Rabies virus can be transmitted from an infected animal to other animals or humans via saliva. Rabies is commonly spread through a bite, a scratch, or licking an open wound where the saliva of the infected animal (rabid animal) comes in direct contact with the animals or person’s mucous membrane.

All mammals can carry the rabies virus, but it is more common in mammals such as dogs, cats, raccoons, foxes, jackals, wolves, coyotes and cats. Small rodents like squirrels, mice, rabbits, chipmunks and hamsters rarely get infected with this virus. In Europe, foxes are the main carrier of rabies, while skunks, foxes, raccoons and bats are the primary sources of infection in North America. In Asia, Latin America, and Africa the main rabies carrier is not wildlife animals but more towards stray dogs. Countries like Australia, New Zealand, the United Kingdom, Japan, Singapore, Papua New Guinea and the Pacific Islands has been declared rabies-free.

Dog to human infection of rabies How to prevent rabies?

Since there is no cure for rabies, prevention is absolutely crucial.

How to tell if your pet dog has rabies?

The period between the bite and the onset of symptoms is known as incubation period. The incubation period is usually less than 6 months, although the symptoms might occur sooner or later. The symptoms may appear earlier depending on the severity of bite and the site of injection. The virus will reach the brain or the central nervous system quicker if the bite is near the brain or the spinal cord. Following a bite from a rabid animal, the bitten animal may go through one or all of the phrases below.

Prodomal phase is the first phase once the rabies virus reaches the brain. This phase lasts for a few days. In this phase, the animal may demonstrate significant behavioral changes such as nervousness, anxiety, and fearness. An animal that is normally friendly may become aggressive towards people and other animals. On the other hand, an animal that is normally aggressive may become unusually friendly or docile. A fever may also be present in this phase. Most dogs or cats will often progress to the furious phase, the paralytic phase or the combination of the two after the Prodomal phase.

In this phase, the animal will become hypersensitive to external stimuli such as light and sound. Furious phase is also known as ‘mad dog syndrome’ because in this phase, the dog or other pets will become restless, aggressive and may viciously attack humans, animals and even inanimate objects. If it was caged, it will chew iron bars until they injure themselves badly. The animal then will become progressively disoriented, begin to develop seizure and it will die eventually. How to diagnose rabies?

In animals, diagnosis of rabies can be done by detecting the rabies virus in any part of the affected brain. This test can only be done post mortem (after death). That means the process requires the animal to be euthanized.

Is there a cure for rabies?

There is no cure for rabies once the symptoms appear. If your pet has been exposed to rabies or bitten by a rabid animal, it needs to be quarantined for observation. Since rabies is a serious public health threat, pets who are suspected of having rabies must be euthanized.

Note: September 28 is World Rabies Day, which promotes the information, prevention, and elimination of the disease. Can Dogs Eat Tomatoes? Here’s Everything You Need to Know

Where can I get a Pet Sitter for Christmas and New Year?