Are you having difficulties training your dog? You are not alone – many owners go through this phase. They think that they’re doing their best to train their pets, but despite their best efforts, they don’t get the expected results.

A friend of mine was experiencing the same frustraion while trying to train his pup. He was putting in a ton of effort to teach is furry friend obedience and discipline, but nothing worked like he hoped it would. So, I decided to share some common dog training mistakes people often make to help pet parents like him avoid the same troubles.

Many pet owners are slow to start the training process. It’s one of the most common dog training mistakes. Some avoid training at a young age because they believe that the dog needs time to adjust to their new environment, but it’s best to establish some basic obedience training on the first day you bring home a new puppy.

Why? Your pet won’t have time to develop some bad habits, so the younger they start training, the better. Create a comforting environment and start slowly. Consistent effort is key to achieve the desired outcome.

That’s not to say older dogs can’t learn new tricks. Police dogs, guide dogs, and agility dogs, for example, don’t start training until they’re more mature. Just note that the longer you put it off, the harder it might be when it comes time to working with each other.

Most of us follow a busy schedule and we might feel encouraged to train our companion when and if we have time. But when our schedules get a little hectic, consistent training is one of the first things that falls to the wayside. It happens to most of us with full-time jobs, boisterous kids, and busy social lives. But if you want your pup to learn, you have to avoid this commmon training mistake and be consistent.

Some breeds are more difficult to train than others and might need more time to learn commands. But regardless, you should expect a big time commitment across the board. Make room in your schedule to train your dog every day until they can master the basics. And don’t forget to reward your pup with lots of playtime for all their hard work afterwards!

Mistake #3: Training in Too Long of Duration

While some people spend too little time working with their dog, others might overdo it. No matter how determined you are to see them succeed, remember there is a limit for everything. Even the smartest dogs have a limited attention span, and if you press them for too long, you can expect them to lose their interest, retention, and food drive. If you really overdo it, they’ll likely feel less motivated to learn during your next session.

In the beginning, aim to train at least 15 minutes everyday, broken up into three five-minute rounds of work, to keep your pup sharp and engaged.

I’ve seen some people who notice a radical differences with their dogs’ behavior in different places because of different stimuli. It’s important to note that every dog is different. Some perform better in packs, for example, while others are solo stars.

Learning what makes your dog unique is half the fun! But if you want your dog to learn more and concentrate on the task at hand, you will have to combine indoor and outdoor training in various settings. Experimentation will help you recognize what works best for your pup so you can help them succeed before increasing the challenge later on.

Some pet owners support bad behavior without realizing it. Many of us are not even aware of some our dogs’ less-than-great habits. For instance, you might allow your dog to come inside because they’re barking, or slide them scraps of human food while cooking.

But if you give them attention, they’ll be motivated to repeat those frowned-upon actions, and if you let them snack all day, they won’t appreciate that food is valuable and requires work. Be mindful of what behaviors you might be inadvertently reinforcing while you focus on training your dog. 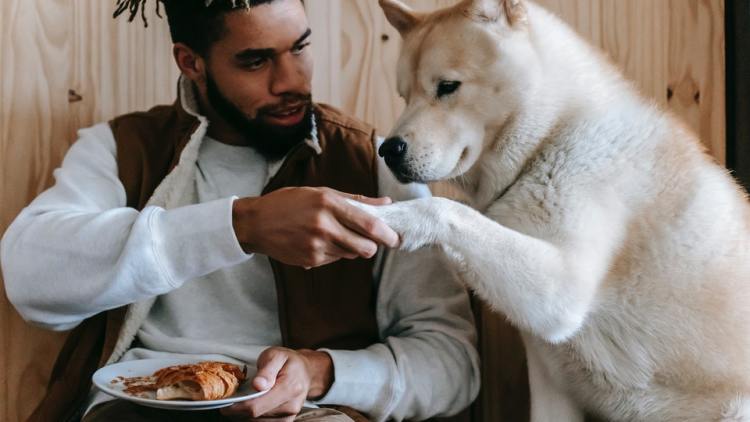 Some new pet owners repeat the same command over and over without receiving the desired action from their dog. If you notice that your pet is unresponsive to a certain word, stop saying it. Otherwise, you risk rendering the command meaningless, so keep it to three iterations max.

For example, rather than yelling “Come!” several times when your dog refuses to move, try switching it up and using the term “Here!” or “This way!” instead. Remember, patience is a virtue, so don’t let yourself get frustrated! Your pup likely is just as confused, so take a break and try again later.

Mistake #6: Using Too Much Emotion

If you get frustrated while training your dog, they’ll likely feel intimidated and scared. And if fear dominates their mind, they will have a hard time focusing on anything else and will likely associate training with a negative experience.

Most dogs love learning and enjoy pleasing their owners, so do your best to keep your sessions light and playful while keeping your expected criteria high. Give them treats and a favorable environment to help them succeed!

Like I’ve mentioned before, if you or your pup feel exhausted with frustration, you won’t be able to put in 100% effort. Training requires strong mental prep for both you and your pup, so be sure to practice patience and know that this relatioship will last a lifetime.

A new pet parent can face a lot of difficulties while teaching their puppy new commands. Avoid these common dog training mistakes to make the process faster and easier for both of you!

All you need to know before running with your dog

Can Canine Eat Oranges? This is The whole...